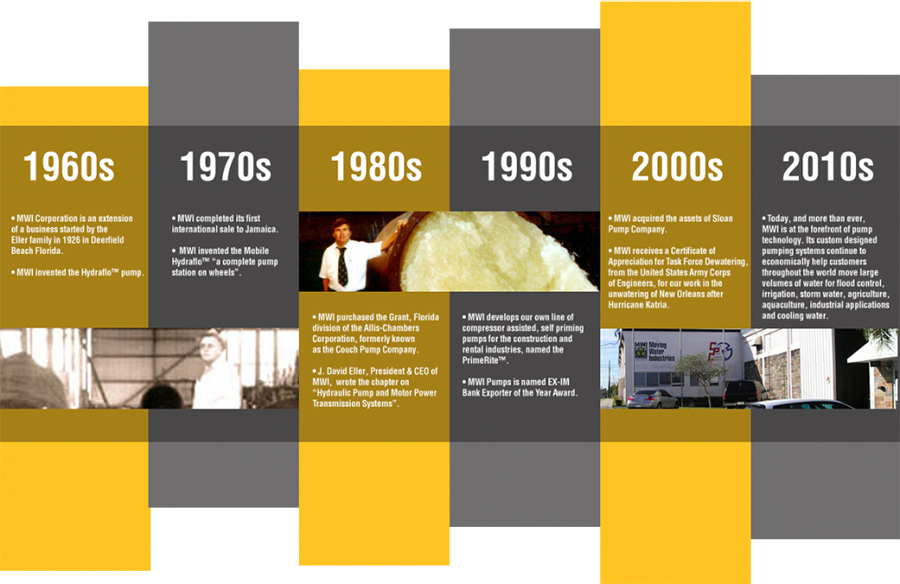 MWI Corporation is an extension of a business started by the Eller family in 1926 in Deerfield Beach Florida. Originally founded as a company engaged in the manufacture of iron and steel equipment, MWI realized the need for a reliable manufacturer of pumping stations for irrigation, drainage and flood control applications.

1917: Couch Pump Company is founded in Grant, Florida as one of the state’s first water pump companies.

1926: After arriving from Alabama in 1924, Hoyt Eller opened a small machine shop in Deerfield Beach Florida in 1926 . It was one of the only machine shops in the area to service and repair agricultural iron and steel equipment. This small machine shop eventually was purchased by his son, Marlin Eller, which became the foundation for M&W Iron Works, and eventually MWI Pumps by shifting focus to pumping equipment for irrigation, drainage, and flood control applications when it was realized Florida had very few options to combat floods and hurricanes at the time.

1928: A deadly hurricane, known as the Great Okeechobee Hurricane of 1928, is the second deadliest natural disaster in U.S. history killing an estimated 2,500-3,000 people on September 26, 1928. The hurricane filled and over run Lake Okeechobee, destroyed farmlands with its 125 mph winds, and caused an early stages of the Great Depression in South Florida by destroying many homes. After these events, the U.S. government initiated one of the worlds most extensive flood control systems in the world. MWI would eventually supply thousands of water pumps to this system and become an important part in its network.

1930: In 1937 Marlin Eller, at the age of 21, bought his father Hoyt’s machine and welding shop on Dixie Highway, just south of the Hillsboro River/Canal for $500. Marlins main business was manufacturing farm equipment including simple irrigation pumps for local farmers.

1950-1953:  During the Korean War, because plate steel was in short supply, M&W resorted to manufacturing pumps from diamond plate.

The business grew up to ten employees during the 1950’s as patents were obtained by Marlin Eller on unique land clearing equipment which he invented, manufactured and sold.

1960’s: M&W Iron Works branched out to include a variety of plate and pipe products for the process and chemical industries – as well as package steel sewage treatment plants.

1964: M&W Iron Works officially was rebranded as M&W Pump Works after David Eller graduated from University of Florida and began focusing the company on the manufacturing of high-quality, high-volume water pumps.

1965: Marlin and David Eller designed and started building the 50,000-square-foot factory, which today, including warehouses and additional buildings, spreads over 4 city blocks.

1968: MWI invented the Hydraflo™ pump. At that time, all axial flow pumps consisted of conventional designs which required carefully aligned transmission shafting, critical drive arrangements, and large pump house floor areas for accommodating driver and transmission center distances. So in 1966, MWI undertook the design and development of a new class and type of high capacity pumping unit. Our main goals were to achieve greater compactness of the overall station, completely eliminate the requirements for great lengths of pump shafting with numerous precision bearings, development of a positive pressure lubrication system for the bearings, and above all, eliminate the need for drive systems requiring critical alignment and large floor spaces.

Another very important aspect of this new design was its portability – mainly, the capability to install and remove the pumping units from their location without high costs and long periods of “down-time.”

MWI originally tested the Hydraflo™ on a large dewatering job where traditional self-priming pumps were insufficient to handle the substantial amount of groundwater. The product was so successful that the customer insisted that MWI offer the pump on a rental basis.  Recognizing this opportunity, MWI Pump Rental was born.

1971: MWI completed its first international sale to Jamaica. Subsequently, the Company began serving customers throughout the world. Today, MWI has pump systems operating in over 50 countries and is one of the largest privately-owned pump manufacturing business in the US.

1975: Between 1975 and 1977, the company invented the Mobile Hydraflo™, “a complete pump station on wheels”, which can be deployed in a matter of minutes, without the need for cranes or other installation equipment. Today there are thousands of these systems all over the world.  Over the years, MWI has expanded this product line to include sizes up to 30 inches, as well as electric, submersible electric, and line shaft models.

1976: MWI out-performed Couch Pump Company in a pump-to-pump efficiency / fuel consumption test and was awarded a contract to supply propeller pumps to U.S. Sugar Corporation. Over the years, MWI has supplied over 800 propeller pumps to this customer.

1983: MWI purchased the Grant, Florida division of the Allis-Chambers Corporation, formerly known as the Couch Pump Company. Recognizing Couch’s rich history and loyal customer base, MWI re-established the Couch brand name on all of the facilities and equipment at Grant. To thousands of customers, the Couch name was synonymous with quality. Currently, over 8,000 Couch pumps are successfully operating today.

1983: MWI finalized its first transaction under the EX-IM loan guarantee program and provided $33 million worth of pumps and accessories to the Federal Government of Nigeria for agricultural development. This credit was subsequently expanded by the Board of Directors of EX-IM Bank by an additional $50 million.

Since this time, MWI has finalized $292 million in EX-IM Bank financed transactions with $212 in Sub-Saharan Africa and $30 million in South America. MWI went from zero EX-IM Bank transactions in 1983 to being the number 13 overall user of EX-IM financing nationwide and the number one Small Business user by 1992.

1989: MWI began manufacturing Ruwatsan I and II hand pumps, as well as heavy-duty well drilling rigs and related equipment. MWI’s experience in hand pump production, along with extensive interaction with rural villages led their engineers to the realization that existing hand pump technology would never allow villages to solve their water problems. Although much good had been accomplished through public and private organization’s attempts to help rural areas meet minimum requirements, the old methods of collection and distribution of water still prevailed, promoting disease and lowering the quality of life. MWI had a solution for this problem – the SolarPedalflo™. This pump is a complete village water supply system and is able to deliver treated potable water to any location in a rural village on a continuous basis. The unit lifts water from boreholes using a MWI designed borehole reciprocating piston pump. It is driven by solar power and, if needed, pedaling can operate it. SolarPedalflo’s benefits are numerous, but its primary benefit is the improvement in the quality of life in the village where it is installed.

1996: MWI develops our own line of compressor assisted, self priming pumps for the construction and rental industries, named the PrimeRite™.

1997: MWI started significant expansion of the rental division from the initial location in Deerfield, to 6 locations. Today, MWI Pump Rental Division maintains an available capacity that is great enough to by-pass the entire Potomac River. We also maintain the largest pumps available for rent in the world, the 60-inch Hydraflo™, with the ability to move of over 120,000 gpm per pump.  Based out of Florida, MWI Pump Rental has one of the largest pump solutions (5000 gpm and above, per pump) directly and through partners across the USA, wherever large amounts of water (10,000 gpm to over 1,000,000 gpm) need to be moved, for less cost per gallon, and less number of pumps, than any traditional rental pump on the market.

2004: Second Street between Federal Highway and Martin Luther King Jr. Avenue in Deerfield Beach, FL was officially renamed Eller Street after MWI founders who are one of the pioneering families of the town.

2005: MWI receives a Certificate of Appreciation for Task Force Dewatering, from the United States Army Corps of Engineers, for our work in the unwatering of New Orleans after Hurricane Katrina. It is estimated that MWI’s equipment moved approximately 80% of the flood water out of the city until the time that the Cities main pump stations came back online.

2006: After Hurricane Katrina, MWI  received an order to manufacture and deliver forty 60-inch Hydraflo™ pumps in 5 months to provide temporary hurricane protection. These pumps continue to be an important part of the hurricane protection system of New Orleans to this day.

2008: Due to the increasing demand for a compact yet robust, full waste-water treatment plant bypass solution, the Hydraflo™ H3NC high-head non-clog hydraulic submersible pump was developed by Dana Eller and MWI’s Engineering team.

2012: After flooding in Thailand, MWI supplied twenty four 30″ Hydraflo™ pumps to be deployed around the country for flood protection.

Today, and more than ever, MWI is at the forefront of pump technology. Its custom designed pumping systems continue to economically help customers throughout the world move large volumes of water for flood control, irrigation, storm water, agriculture, aquaculture, industrial applications and cooling water.

MWI Pumps continues to be a leader in the global engineering and manufacturing of custom-designed axial and mixed flow pumps and related systems, with over 20,000 propeller pumps built to date.