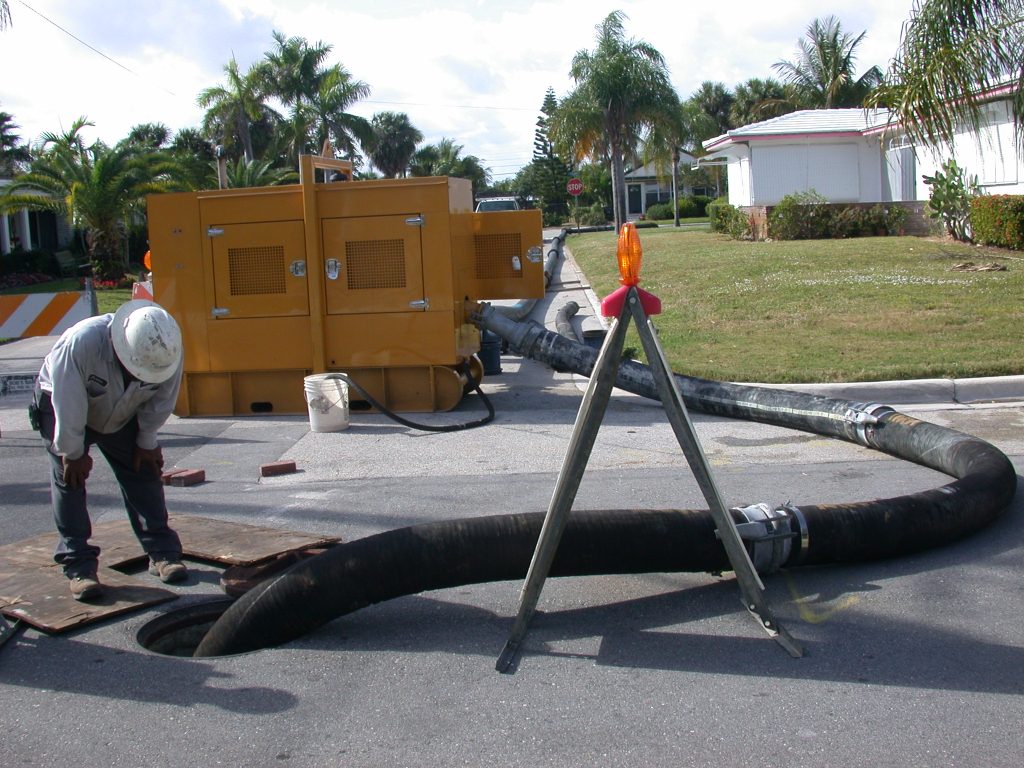 In our previous article (PART 1), MWI Pump’s Steven von Gontard outlined some of the initial steps when performing any sewage pumping bypass, as well as the first two problems that could arise. Continued here are an additional six problems which may occur on the jobsite and how to combat them:

Utilizing floats for the automatic start/stop function can resolve this issue. Floats also improve the efficiency of the system. It is fine to run the system 24/7 if there is water. However, half the time the system will be pumping air that goes into the force main and gets trapped at the highest point. If there is no air-release valve, then no amount of horsepower will break the air lock. MWI centrifugal bypass pumps come equipped with built-in floats.

Another stop-start mechanism that can be used is a transducer, which is a level or pressure device. It can be programmed to keep the water in a certain area at a certain level. The transducer stops and starts and can work with electrical throttles, whereas the float system is a simple start-stop with no throttle control.

Floats ensure efficiency, save fuel, and limit noise pollution. These float devices also protect the equipment, which is typically rented. The pumps are dry running but should not run dry for many hours. The other key component is telemetry call boxes. If a pump doesn’t start or if a massive amount of flow overwhelms the system, it would send an alert to the contractor or whomever is monitoring the system. These devices are included with all MWI’s critical path applications.

Adjusting the height of the suction point and routinely checking the strainers can resolve this issue. “There is a lot of junk down in those systems, so we use a strainer on a suction hose to protect the pump from sucking in a brick or a rock or anything that could damage the equipment,” von Gontard says. “If you are bypassing long-term (more than 30 days), debris can slowly collect all around the strainer and block the water from passing through. This can suffocate the system.”

Adjusting the float level and engine RPMs, or adding delays into the control panel can resolve this issue.  “If you are pumping from a small or shallow system without a lot of time to surcharge and let a lot of water to collect, the pump will turn on and may pump down everything in a minute or two, and then it will want to turn off,” von Gontard explains. “If you don’t give those pumps about 10 minutes of run time, they won’t have enough time to recharge the battery which gives the engine the power to start. To prevent this issue, you could put a solar panel trickle charger on the battery to keep the battery strong, or you can program delays into the panel.”

For example, if the run time is two minutes then program the panel to run for an additional eight minutes after the float drops.  Alternatively, increase the distance between the floats so that the system will run longer. You can also manipulate the throttle—rather than run at 1800 RPMs, run at 1200 RPMs to make it pump a bit slower.

Typically, your backup pump will be in an automatic mode with a slow draw on the electrical system. This can cause the battery to weaken. An auto-dialer GPS telemetry system will often be installed on the backup pump to further weaken the battery.  Scheduled periodic running of the backup pump for a minimum 20-30 minutes will resolve this issue.

The ideal bypass system has a primary pump that runs all the time and a backup pump that is used for emergencies only. The backup pump is generally in auto-mode, which means it will start when the floats are triggered. If the water runs above the primary, the backup turns on. But if it is left alone for a few weeks it will very slowly draw the battery down. You can add a solar panel, or simply run the backup pump once or twice a week for 30-minute intervals to keep them charged and running efficiently. This exercises the battery and provides more confidence in the backup pump.

Securing the floats to a float tree can resolve this issue. When pumping out of a manhole with a 24-inch ring and cover, the opening inside can actually be bigger. There are generally two 6 to 8-inch hoses and at least two floats for the primary pump and two floats for the backup pump. The floats must have the ability to travel up and down with the water. If they get pinned against the wall by a hose or if they get tangled, they won’t be able to trigger the system on and off as designed.

“I’ve had success attaching the floats to a tree (built using 1 1/2-inch PVC pipe) that runs from the bottom of the manhole to the very top,” von Gontard explains. “I’ll use a zip tie or tape to attach the floats to the predetermined levels so they can be maneuvered out of the way of the suction hoses. This fix allows the floats to move freely without disruption. In a larger storm bypass, tree limbs and sticks can get stuck against it which restricts the float from operating. I also like to tape the wires from each float to the suction hose so that those wires do not cause a trip hazard or yank the connection loose at the pumps.”

Locking Silent Partner™ quiet-pack enclosures on pumps will resolve some of these issues.

“Whenever a rehab is in place in a residential area, the residents aren’t always thrilled,” von Gontard says. “Sometimes out of ill will or simple curiosity, they will mess with the equipment or want to open the panels. Sometimes the noise volume annoys them, and they try to turn it off or cut a fuel line. We put quiet units out there, but as added security, we have the ability to lock all the enclosures for an added layer of security. When installing the system, it’s a good idea to look at the surroundings, use sound-attenuated enclosures and try to position the equipment in an area that may be less annoying for residents, but still allow the system to function effectively. Usually, residents just do not understand the importance of the work that is being performed for their benefit, but nevertheless it does happen, so precautions should be put into place.”

How to Solve Construction Dewatering in 6 Steps – PART 1