Police Vow to Get Remaining Residents Out of New Orleans

As a handful of pumps toiled to drain the water out of a sprawling city today, the New Orleans police said they would force the 10,000 or so residents left in the city to leave and Louisiana officials warned of long-term damage to the area’s environment.

The police superintendent, P. Edwin Compass III, said police officers and other rescue workers going door to door would do all they could to remove every resident still in the city of nearly half a million, to protect them from lawlessness, get them to shelters and make sure children are fed.

“If that’s necessary, we have the manpower to do it,” Mr. Compass told CNN this afternoon about reports that they would force out people who insisted on staying in their water-logged neighborhoods. “We’ll do everything we can to keep this city safe. These people don’t understand they’re putting themselves in harm’s way. “We’re trying to save them from themselves,” he said. “We’re going to get the residents evacuated and then we’re going to get all the criminals out of New Orleans. ” With fires raging in some buildings and houses and New Orleans in lockdown, the authorities said today that they made 150 arrests this week as they tried to bring some order to the streets.

With the city’s municipal buildings unusable, the authorities today created a temporary jail at a local Greyhound bus station. Early today, the makeshift jail held 124 inmates, and Jim Letten, the United States attorney for New Orleans, who has set up an office in Baton Rouge, said it was a sign that law and order were returning to the city. “It’s essential to our being able to do criminal justice operations in this city,” he said.

In addition to armed guards from the Louisiana Department of Correction and the Orleans parish sheriff’s office, agents from the Federal Bureau of Investigation, the Drug Enforcement Administration and the Bureau of Alcohol, Tobacco and Firearms were at the jail, as well as two assistant United States attorneys, Mr. Letten said at a news conference this afternoon. He said there are plans to open a second detention center, in a “traditional jail facility.”

Nearly 8,000 prisoners were transported out of New Orleans jails last week and moved to state prisons and jails in neighboring towns. Even as rescue officials dealt with the human toll from Katrina, environmental officials told about the long-lasting harm that would come to the area from nearly 7,000 underground storage tanks still submerged in water, widespread destruction of wildlife and degradation of the state’s wetlands, marshes and coastline. “It is almost unimaginable what we’re going to have to plan for and deal with,” said Michael D. McDaniel, the Louisiana secretary of environmental quality. And as President Bush and Congressional leaders vowed to find out what went wrong in the federal response to the disaster, Mayor C. Ray Nagin of New Orleans said that the final death count would horrify a nation that has been transfixed for more than a week with televised images of the catastrophe. 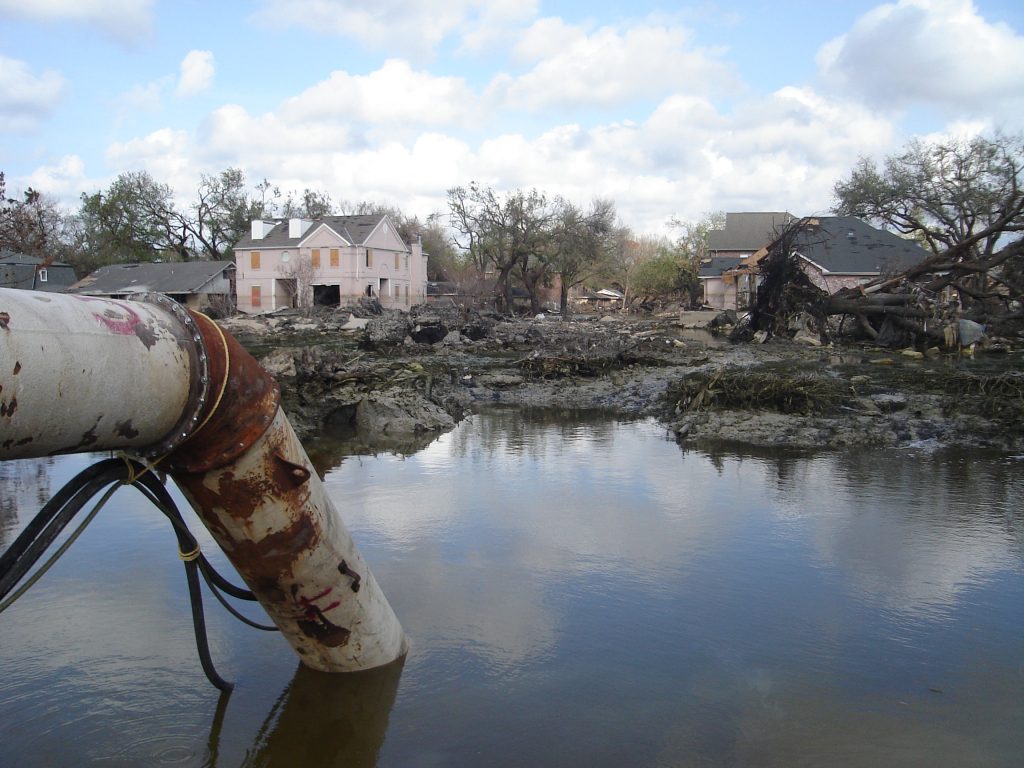 “The computer models say 10,000,” Mr. Nagin said this morning on “The Early Show” on CBS. “I don’t know what the number is. But it’s going to be big. And it’s going to shock the nation.” He also said everyone shared the blame for what happened in New Orleans and the Gulf Coast as Katrina overwhelmed the levees holding back the water, as well as the emergency workers and government officials charged with responding to the disaster. “I think we all do,” he said. “I think this is America. And you know, what happened here should never, ever happen again. “Let’s do some analysis and fix this,” he said.

The Senate’s Committee on Homeland Security and Governmental Affairs announced today that it would hold hearings to investigate failures in dealing with the storm and its aftermath. Mr. Bush also said he would order an “investigation into what went right and what went wrong.” The statistics on the disaster’s effects continues to overwhelm local and federal officials, and people across the country who have watched the drama unfold.

The Federal Emergency Management Agency said today that 315,568 Louisiana households had registered for temporary housing and other forms of disaster relief, and 93,000 of them had registered online. Its estimated expenses for hurricane-related relief had grown to $2.9 billion by this afternoon, but much of that money had not yet been spent. Throughout the state, 339,449 customers in 25 parishes remained without power. Louisiana officials said that 52,835 evacuees remained in the state and 78,421 had left, mostly for Texas. 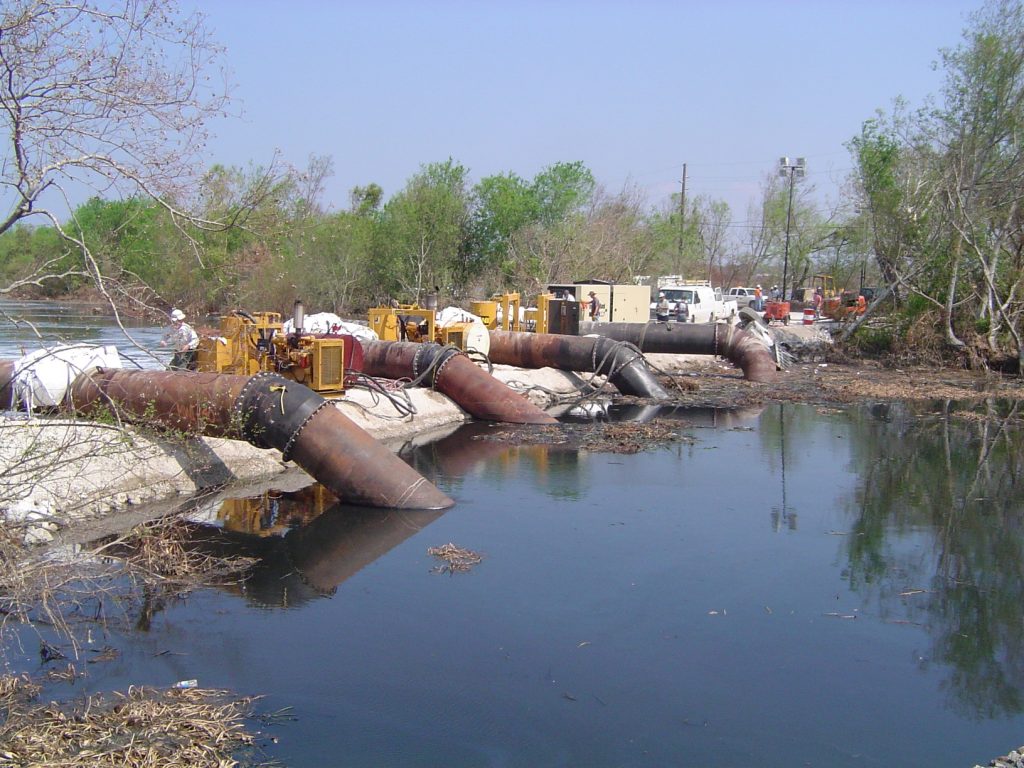 Officials announced today that they’re exploring opening new shelters so that Louisianans could return home from other states, particularly Texas, if they wished to do so. Two possibilities are Camp Minden, a former Army munitions plant in Pineville, and the England Industrial Airpark, a former Air Force base in Alexandria. Louisiana officials reported two encouraging developments: a pair of major oil spills were declared under control, with one of them drifting out into the Gulf of Mexico and away from the state’s ravaged coastline, and 170 sources of radiation, ranging from hospitals to pipe-welding plants, have been secured, the officials said. Officials also said that 140,000 to 160,000 homes had been submerged or destroyed; 60 to 90 million tons of solid waste must be cleaned up, and 530 sewage treatment plants were inoperable. They warned that it would take years to fully restore clean drinking water.

Dr. McDaniel, the state’s water quality chief, who is a biologist, acknowledged that the soupy basin that is New Orleans was filled with bacteria and other contaminants, but he said the extent of biological and chemical hazards would not be clear until the federal Environmental Protection Agency completed laboratory tests. “In addition to the oil and gasoline-type compounds, I expect we’ll see some traces of truly toxic materials – things like pesticides, perhaps metals,” he said. “We have homes with hazardous materials in them. We expect to see some nutrients obviously, as we flooded a lot of lawns and garden areas.”

Scientists have already begun to warn that pumping billions of gallons of brackish water from New Orleans back into Lake Pontchartrain could have harmful long-term consequences. Officials of the Army Corps of Engineers said that by this afternoon only 3 of the city’s 148 pumps – each capable of pumping 4,600 cubic feed per second – were operational. In addition to the regular pumps, one small portable pump, capable of pumping just 9 cubic feet per second, was operating at the 17th Street Canal.

A spokesman for the Army Corps said it would take 24 days to pump the water from an eastern section of New Orleans and 80 days to clear the flooding from Chalmette, the seat of St. Bernard Parish. In St. Bernard and Plaquemines Parishes, to the east and south of New Orleans, there were still areas where engineers had to breach levees, dikes and storm walls to allow water to flow out before any pumping could occur. Daniel H. Hitchings, the spokesman, said the Army Corps was worried about another storm hitting during the hurricane season. “Certainly if we had another Category 4 event, we’re not prepared for that,” he said. Dr. McDaniel said he believed the lake would eventually recover. “The bacterial contaminants will not last a long time in the lake,” he said. “They actually die off pretty fast. The organic material will degrade with natural processes.”

The Pentagon said today that there are now about 58,000 troops in the region supporting the civilian agencies. The total breaks down to 41,000 National Guard members and 17,000 active-duty troops. Sewell Chan reported from Baton Rouge, La. for this article, and Maria Newman from New York. Christine Hauser contributed reporting from New York and David Stout from Washington.